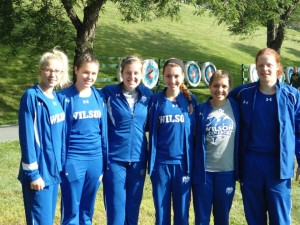 Patrick Fox has made history as the first male athlete at Wilson College since its founding in 1869. Fox ‘16 participates in the brand new cross country team at Wilson.

“It is a lot of work, but it’s worth it,” Fox said of his experience on the team.

While Wilson has allowed men to matriculate through its adult degree program in years past, this is the first year that the college has welcomed traditional college-age men and offered them the opportunity to participate in sports and other extracurricular activities.

Fox is one of eighty male students on campus and the first to participate in intercollegiate athletics at Wilson.

He decided to run cross country because he “likes the physical challenge.”

In high school, Fox participated in track and field.  After completing his freshman and sophomore years at the University of Pittsburgh, he decided to transfer to Wilson. Fox commutes to campus from his home in Chambersburg and appreciates the academic opportunities Wilson offers.

Fox made a good first impression on his teammates and his new coach.

“I enjoy having Patrick on the team,” said fellow cross country runner Megan Foreacre ’15. “I like trying to compete with him, although I’m sure he has no idea that I do that.  It definitely motivates me to keep my game up.”

Patrick’s coach, Joanna Hayes, said, “He is a hard-worker and very coachable. From the short time that I have coached Patrick, I have found him to be dedicated, respectful and hardworking.”

“He is as dedicated and hardworking as we all are,” Foreacre added. “The only place he can go from here is up.”

Fox does not feel as if he is treated differently as Wilson’s first male student-athlete.

“I don’t think I’m treated any differently because I’m a guy,” said Fox. “We work hard together, so I think we have equal footing in that respect.”

Foreacre stated, “For most of us, this is our first time running cross country.  We have all been extremely welcoming and encouraging to Patrick as well as everyone else.”

Foreacre also encourages other males at Wilson who may want to join a sport.

“We need more guys on the team so Patrick doesn’t feel so alone!” she said.

Coach Hayes agrees. “I think that guys would add even more excitement to Wilson College athletics. I think it’s great that the college has gone co-ed and that we have sports available to men.”

In addition to his involvement in cross country, Fox also participates in the Student Athlete Advisory Committee, Residence Council, Yearbook, and plans to join the Wilson Magazine.

“At the end of the day, I’m glad I was given the opportunity to be here as a student and to participate in athletics as well as other programs on campus,” said Fox. 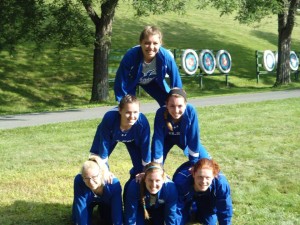