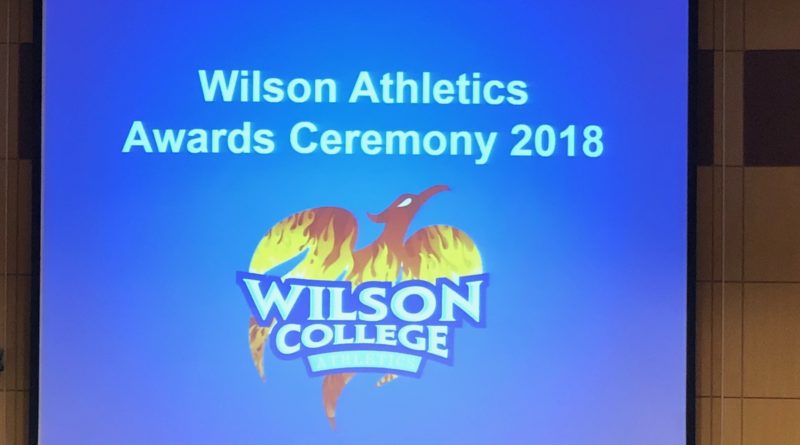 Wilson College’s Annual Sports Banquet, held on Sunday, Apr. 29, recognizes athletes for their accomplishments and achievements on and off the court/field. Athletes, students, parents, and faculty gathered in the Brooks Science Complex auditorium to attend this monumental occasion.

The event began with remarks from Athletic Director Lori Frey, who welcomed everyone to the event. She introduced President Barbara Mistick who shared a tremendous story about her father who sadly passed away.

Professor Lynn Newman, NCAA Faculty Liaison, recognized students in various sports with a GPA of 3.4 or higher, who received the Scholar-Athlete Award. Moving forward, Mary Ann Naso, former Vice President of Enrollment, presented the Bill Kallabaugh Award for Academic Excellence to Marquis Beckett ’18, who won the award for the fourth year in a row.

Beckett stated, “It was a great feeling. I was happy to achieve this award for the fourth time. I am honored.”

Field Hockey received the Team Academic Awards for the fourth year in a row, as well. Kallie Butts ’18, a member of the Field Hockey Team, said, “I’m glad I got to be a part of this award for four years straight. We deserved it and we worked hard for it.”

As the night went on, each team and their coach approached the front of the audience to discuss their season and their accomplishments throughout the season and school year.

Frey took the podium again and presented the senior awards, given to all seniors for their hard work and dedication to Wilson’s Athletic Department.

Powell commented, “I felt honored and blessed to be named Rookie of the Year because I saw all my hard work from the offseason finally pay off.”

Singer was overjoyed as she mentioned, “I was extremely honored to be nominated for this award, let alone win it. Everyone who was nominated was well deserving of this award.”

The last few awards handed out included Athlete of the Week, in which athletes were recognized for their hard work during a week of their season; the four-year letter winners, which were given out to seniors who completed four years of playing a sport; and the All-Conference Selections, which was given to Henderson for making Third Team All-Conference this year.

Lastly, the Coach of the Year award was presented to Coach Brian Zoeller. Zoeller and his team made history as being the first Men’s Basketball program to go to the NEAC Conference playoffs and were also invited to the ECAC Tournament. The Men’s Basketball team record has been the best so far with an overall record of 20-8 and 12-3 in the NEAC.

Frey ended the evening by congratulating everybody and thanking the athletes for all their hard work. She also expressed thanks to everybody who attended the banquet.