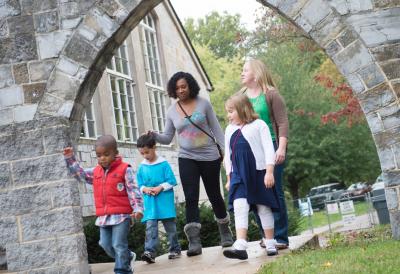 Wilson College has been awarded a $25,000 grant from the Eden Hall Foundation to fund research on the effects of taking part in the Student Parent Scholar program on the children of program participants. SPS, formerly called the Women with Children program, allows single parents to live on the Wilson campus with their young children while they pursue their degree.

The grant will allow Wilson and an external research partner to conduct interviews with current and former Single Parent Scholar program participants, as well as current and former program directors, to develop an exploratory research study on outcomes for children who lived on the Wilson campus while their parent attended college.

Wilson was invited to apply for the grant by the Eden Hall Foundation, a private Pittsburgh-based foundation that helped launch the Women with Children program in 1996, providing $946,000 in 1997 and 1998 to renovate Prentis Hall as housing for program participants.

In 2015, the program was opened to single fathers and renamed the Single Parent Scholar program. Currently, 13 single parents are enrolled in the SPS program. Over the past 20 years, the program has touched the lives of 120 student-parents and at least that many children, according to the college.

In 2016, Endicott College published a research study that examined eight undergraduate student-parent programs, including Wilson’s, and recommended further research on the effects of such programs on participants’ children. “While the positive impacts on single parents may be more apparent in terms of the increased earnings, independence and stability associated with college degree completion, impacts on children of these single parents are more nebulous,” Wilson’s grant application states. “Positive impacts may be academic, social-emotional, physical and/or behavioral in nature.”

Anecdotally, the effect of living in an academic environment has been positive on the children—with some even returning to Wilson to seek their own degree—but no formal research has been conducted.

Findings of the new research study would be shared with the Eden Hall Foundation, as well as potentially with other stakeholders, including the higher education community. In addition, study results may be used to help identify improvements to the Single Parent Scholar program at Wilson.

The Eden Hall Foundation was established in 1984 in accordance with the will of Pittsburgh philanthropist Sebastian Mueller, who had been vice president and a director of the H.J. Heinz Co. Mueller provided substantial financial support for: improving conditions for the poor and disadvantaged, promoting sound education and benefiting health facilities and projects. Today, foundation trustees continue his stewardship in the areas of social welfare, health, education and the arts.