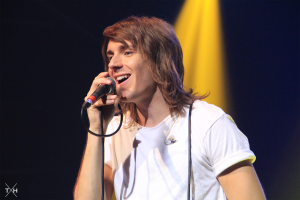 After eight years together and three studio albums, the band This Century announced last year that they would go their separate ways after the release of their third studio album “Soul Sucker.” Despite the band’s break-up, each member said they still plan to work with music in some way. This split was just a step in the direction each member wanted to go.

Joel Kanitz, lead singer, already figured out his path with the release of his first single “In My Room” with his new solo project “Gorgeous War.” He released the single in December 2015 and recieved a great response from fans. Compared to his former band’s music, the sound with his “Gorgeous War” project is a bit more techno and pop sounding, compared to The Weeknd and Justin Bieber’s latest sound on his blog page, as opposed to the more alternative/rock based sound of This Century.

As his blog biography also states, “[Gorgeous War] fuses the genre divide between the catchiness of Top 40 and the intricate instrumentation of the alternative scene.” Kanitz is trying to create his own sound after branching out, and fans of his band This Century support the now solo artist with his endeavors by showing their support on social media.

As for why he titled the solo project “Gorgeous War,” Kanitz said this on his blog page:

“My drummer at the time [from This Century], Ryan, told me that he was reading a book once and saw “gorgeous” and “war” next to each other. The words really struck me, and from that moment they were this anomaly that just always stayed with me, demanding further insight. It was an unusual juxtaposition of two words that don’t typically belong anywhere near each other. I wanted to dig deeper into what kind of meaning they could have together and understand why it resonated with me–so I did, and inevitably decided on that name for my music.”

Kanitz plans to release more music and his current single “In My Room” can be downloaded on iTunes at https://itunes.apple.com/us/album/in-my-room-single/id1067331497. To learn more about Kanitz and his new solo project, go to http://gorgeouswar.tumblr.com/.